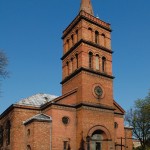 The construction of the Garrison Church (also known as the Church of Holy Mary Queen of Poland) in Gniezno began in 1838. Schindler’s original design was subsequently amended by Karl Friedrich Schinkel. The building works were completed four years later and the church was consecrated on the 25th of September 1842 by the bishop Andreas Wilhelm Freymark, the chief administrator from Poznan. The shrine (originally evangelical church) was a parish building which encompassed the city itself, surrounding villages as well as the army contingent.

The church dates from the first half of the 19th century and is an eclectic structure. Above the main entrance there is a four-sided tower built in an Italian style. The tower itself is crowned with cone-shaped brick cupolas. German inscriptions survived on the main entrance doors to the church. Between 1896 and 1897 the edifice was enlarged in accordance with Wesingk’s design. Inside, along the side walls there are numerous galleries. In the church there are two sacristies. On the main altar, above the tabernacle, there is a painting depicting Virgin Mary, Mother of God. Three stained-glass windows constitute the main decoration of the presbytery.

Due to the restoration works which began in 2010 a fragment of one the main walls was water damaged, revealing some mural paintings. That was the reason why preliminary stratigraphic tests on the mural paintings were conducted. The results proved that the painting techniques used in the church were truly astounding. Several discoveries were made; however, they mean that more questions need to be answered. It is certain though that the mural paintings decorated the interiors of the church.
We do know that there were at least two layers of paint. The oldest layer, which matched the colour scheme and the composition of the church windows, was connected with the window jambs themselves. It has been proven that the first paint layer, apart from rich background with rims had numerous floral patterns. These discoveries lead to more questions concerning the entire composition of the mural paintings. It would be interesting to know whether similar mural decorations existed near the chancel arch or whether they existed above the nave arcades. Maybe they were stripes above the beam ceiling?

In 1945 the building changed its owner. Prior to 1945 the edifice was a part of the Evangelical Church. Later that year it became a property of the State Treasury and as such it is governed by the Ministry of National Defence.