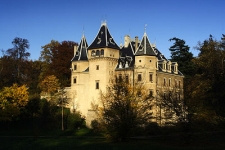 The history of the Gołuchów Castle on the Trzemna River dates back to over 400 years ago. Initially it was the residence of the Leszczynski family who had a castle with a moat erected there in 1560. The building itself was also surrounded by natural swamps and overflow areas. Fifty years later Waclaw Leszczynski decided to rebuild the family residence, by erecting in the direct vicinity of the castle, a humble single storey palace. The palace was built on the plan of a trapezoid and was supported from the south-west by a five-sided tower. Two narrow wings were added to the corner towers thus creating an internal courtyard with a porch.
In 1695 the castle was sold by the Leszczynski family – this marked a gradual process of dilapidation of the building itself.

In 1853 the Gołuchow estate was purchased by Tytus Dzialynski, the owner of the Kornik estate, for his only son Jan. After the marriage of Jan Dzialynski and Duchess Izabella Czartoryska, daughter of Duke Adam Jerzy Czartoryski, Goluchow was to become the residence of the newlyweds. Unfortunately, the events leading to the outbreak of the January Uprising meant that the couple were not to enjoy their new estate for long. Jan Dzialynski became one of the organisers of the uprising in the region of Wielkopolska. He spent most of his own fortune and lent large sums of money from his wife. The Prussian authorities issued him with a death sentence and his property was sequestered in retribution for his participation in the January Uprising. Consequently Jan Dzialynski was forced to emigrate and up to 1871 he lived in Paris together with his wife. He would buy and collect numerous old and antique objects. After having returned to Poland Jan Dzialynski regained his estate and concentrated himself on restoring it.
In the early 1870’s the castle became the sole property of Jan’s wife Izabella, which was a form of debt repayment to his wife’s family. Izabella wanted to turn the castle into a museum, whereas the small palace, a former distillery located in the proximity, was to become their permanent dwelling place. It was thanks to her that the castle was restored by architects, sculptors and painters from France, among others by Charles Biberon, Louis Breugnot and a young architect Maurice August Ouradou, Eugene Viollet-le-Duc’s son-in-law.
While numerous details characteristic of the Polish Renaissance castle were preserved, the entire property was rebuilt in the style of French Neo-Renaissance, based on the famous Loire valley castles. The restoration works meant that the north-west tower was dismantled, and the edifice itself was lowered so that the former 16th century stronghold of the Leszczynski family was reduced to three habitable three-storey towers. Most of the sculptures, shutters, as well as Gothic and Renaissance fireplaces decorating the building, were purchased by Izabella Dzialynska in various European antique shops. 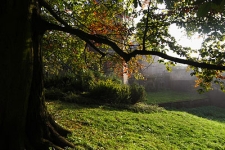 The castle is picturesquely surrounded by a landscape park, the biggest in Wielkopolska, covering an area of circa 160 hectares, with a collection of a few hundred species of trees and shrubs imported from different parts of the world. Originally, next to the castle there was a small Italian-style garden. A little farther away were peasants’ quarters and a forest. The unique features of the landscape made Jan Dzialynski establish an English-style park. Since approximately 1876 landscaping work on site had been supervised by the gardener Adam Kubaszewski.

It is possible to say that 1885 was the year when the museum, in which Izabella was trying to recreate the residence of the Leszczynski family from the turn of the 16th and 17th century, was open to the general public. The exhibits included original paintings, sculptures and tapestries. A separate room was dedicated to a collection of antique vases, Limoges enamels, and various arts and crafts objects.
After Izabella’s death in 1899, the property was consecutively inherited by Prince Witold Czartoryski and then by Prince Adam Czartoryski, the owner of the Czrtoryski Museum of Cracow and married to Countess Maria Ludwika (nee Krasinska). Recognising a real danger Maria Ludwika (Prince Adam died in 1937) shortly before the outbreak of the Second World began removing the most valuable artefacts from the castle. The most important works of art were transported to Warsaw in eighteen zinc coated chests and hidden in the cellars of the house belonging to Maria Ludwika at Kredytowa Street. Unfortunately, in October 1941 the treasure was discovered by the Nazis and taken to Fischorn Castle in Austria. The artefacts became the subject of fierce bidding war between the most important museums of the Third Reich. After the end of the Second World War the stolen art works were claimed back, however, due to an administrative order they did not return to Goluchow but to the National Museum in Warsaw and Poznan.