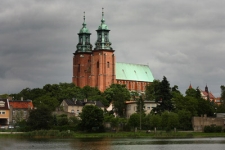 Cathedral Basilica of the Assumption of the Blessed Virgin Mary and St. Adalbert is considered to be one of the most important Polish monuments as far as history and art are concerned. It is the place where five of the first Polish monarchs were crowned. Until 1992 archbishops of Gniezno were also given the title of Primate of Poland.

It is feasible that in the 9th century (100 years before adopting to Christianity by Mieszko I) on the Lech’s Hill there existed a Christian shrine (in place of pagan cult), the relics of which have been discovered in the vaults of the Cathedral. In this exact location, in approximately 970, Mieszko had a second church erected. Subsequently it was where his wife, Dabrawa, was buried. In 999 the remains of St. Adalbert were deposited there and one year later the church was given the status of the archsee which was repeatedly destroyed by numerous fires and enemy raids. 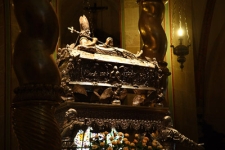 Archbishop Jaroslaw Bogoria Skotnicki initiated the construction of a new Gothic cathedral in the middle of the 15th century. The main body of the cathedral was surrounded by a ring of numerous chapels. The towers were added later on. The south tower was added in 1415, whereas the construction of the north tower was completed in 1528. In the 17th century some of the chapels were rebuilt to suit the Baroque style. Moreover, the main altar in the Baroque style was erected in 1662. A gold plated tomb, made to resemble the one in Saint Paul’s Basilica in Rome, was erected in the 1680’s in the presbytery of the cathedral. A silver casket with the remains of Saint Adalbert was placed there.
In August of 1760 there was a great fire which destroyed parts of both towers and the entire roof which in turn led to the collapse of the presbytery vaults as well as partial destruction of the nave vault itself. The reconstruction works proved to be a lengthy process; however, after they were completed the interiors of the cathedral gained a uniform classical appearance with some Baroque and Rococo architectural elements.
In the 1770’s the cathedral underwent yet another partial reconstruction. In 1806 the French turned the cathedral into army warehouses, whereas, in 1942 the Nazis used the building as a concert hall destroying all the original furnishings. In 1945 the shrine was devastated by a fire, which was in a large measure caused by the Soviet army. 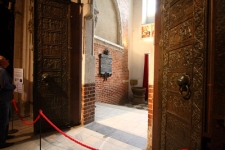 After the Second World War the cathedral was rebuilt in the Gothic style. It is 85 metres long and the height of the nave itself is 22 metres. In the east façade there are two impressive towers dominating the skyline of the town. The presbytery with Saint Adalbert’s tomb is considered to be the oldest part of the cathedral. There is also a cenotaph, an empty tomb, of Saint Adalbert which is supposed to resemble in its very shape the mausoleum of the martyr bishop. Only one of the original marble panels presenting Saint Adalbert survived. It is believed that Hans Brandt was the author of the marble panel. Both the nave and the presbytery are surrounded by fourteen chapels where one may find tombs of numerous archbishops.
The chapel of Our Lady of Czestochowa is well worth visiting. According to Jan Kasprowicz, the curator and rector of the cathedral, one of few 17th century copies of the original painting presenting Our Lady of Czestochowa wearing the crowns presented by king Vladislav IV in 1635 is on display in the chapel.
The entrance to the vaults, where fragments of the old shrines and tomb stones are displayed, is located by the north tower. The former entrance to the cathedral is located by the south tower. It is where the famous Gniezno Doors, previously known as the Kingdom’s Treasure, dating from 1180 may be seen. It is one of the most precious examples of Romanesque metalwork in Europe. The doors consist of two bronze wings with lion-head knockers. There are 18 panels depicting various scenes from Saint Adalbert’s life.