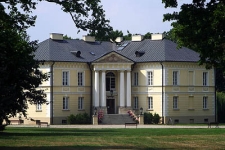 The first historical records mentioning Dobrzyca come from 1327. Dobrzyca was the seat of the Dobrzynski family who used the Leszczyc coat of arms. In 1440 the place obtained both city rights and the crest depicting a white Jerusalem Cross on the red background.

Anna Dobrzycka (nee Rydzewska) with her sons decided to sell the estate to Aleksander Gorzenski, using Nalecz coat of arms, in 1717. The castle, which ruins are believed by the archaeologists to date from the beginning of the 15thcentury, was the owners’ residence.
The castle was continuously enlarged and rebuilt from the 15th to the 17th century and was used as a dwelling place. From 1774 onwards Dobrzyca was in the hands of Augustyn Gorzenski, who, by his marriage to Aleksandra (nee Skorzewska) received the title of Count and a handsome fortune at the same time. This is also when Dobrzyca itself was blooming.
Between 1795 and 1799 the Baroque palace was undergoing refurbishment according to Stanislaw Zawadzki’s designs. 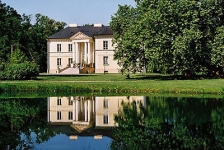 The English landscape park, which was established by Augustyn Gorzenski, could be characterised as having numerous features of a romantic style garden with many pieces of architecture, grotto, artificial ruins and bridges scattered around.
The palace’s south-west façade was decorated with a Tuscan portico supported by four columns. The portico was then decorated with coats of arms belonging to the Nalecz Gorzenski and Drogoslaw Skorzewski families. A pantheon, administrative office and gazebo are clearly visible from the windows in the residence. The state rooms were situated on the first floor of the palace and were magnificently decorated. All the painting work was done by Antoni Smuglewicz and Robert Stankiewicz. Adam Tuno, Augustyn Gorzenski’s nephew, once said that the state rooms were decorated with numerous paintings and the interiors were richly furnished.
One of the most beautiful rooms in the palace is a drawing-room with stucco work done by Michal Ceptowski (or Ceptowicz). Most probably all the decorations and the furnishings were influenced by personal preferences of Augustyn Gorzenski and his wife Aleksandra (nee Skorzewska). Both of them were fascinated by the Italian culture. They made a lot of travels to Italy and France among others. Their fondness of Antiquity and Italian Renaissance was reflected in their choice of art and stucco work decorating their residence. 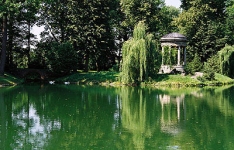 After Augustyn Gorzenski’s demise in 1816, the estate was inherited by his nephew- Kazimierz Tuno, a general in the Napoleon’s army whose wife was Helena (nee Rogalinska). Kazimierz Tuno took great care of his late uncle’s residence realising how priceless it was from both an artistic and a cultural point of view.
Kazimierz Tuno died of wounds he had received during the Napoleonic war in 1817. His family were not capable of maintaining the estate and consequently it was auctioned off and purchased by the Kottwitz family. The residence was then sold to the Bandels. It was exactly when some of the polychrome decorations were repainted to suit the German manner of the time.
In 1890 Count Jozef Czarnecki, who used Prus III coat of arms, became the new owner of Dobrzyca. Notably, Stanislawa (nee Lipska), the granddaughter of Kazimierz Tuno, was his wife. Dobrzyca remained in the hands of the Czarnecki family until the outbreak of the Second World War.
In 1939 an internment camp for Polish gentry from the region of southern Wielkopolska was set up there. After the war the entire estate became a property of the Polish State Treasury. The palace was turned into flats and offices; there was even a school and a library.
In 1988 a branch of the National Museum in Poznan was created. Eight years later the voivode of Kalisz decided to open a museum there.