The Fara Church in Poznań

Today’s collegiate church is not the same shrine it used to be a few centuries ago. A sequence of dramatic events resulted in the complete destruction of the old building which can only be admired in a number of illustrations and prints alike. It remains unclear as to when exactly the church of Saint Mary Magdalene was founded, though it is commonly believed it was established in 1253. That is exactly when Przemysl, the Duke of Wielkopolska, moved his residence to the left bank of the Warta River. It is highly possible that the building works on the city church started the same year. Furthermore, it is plausible to say that the parish was established there circa 1252; though quite possibly it was an improvised chapel only.
The original parish church was located at the Kolegiacki Square and it was surrounded by a churchyard cemetery. The exact date of the foundation of the church itself remains disputable. Since the chronicle entries differ greatly (according to ‘Annales Posnanienses’ the church was founded in 1253, whereas in ‘Kronika Wielkopolska’ one may read that the church was established in 1262) it is difficult to establish how long it took to erect the building from the moment when the city rights had been issued.
In 1263 Bishop Boguchwal III consecrated the first church in Poznan. The Church of Mary Magdalene was consecutively under the auspices of the cathedral chapter (13th century), King Przemysl II (up to 1296), nuns of the Dominican Order (up to 1447), Polish kings (up to 1555) and finally the local authorities.

It is unknown how the original building looked like. It is certain, however, that in 1388 it was replaced with a new gothic edifice, which burnt down in 1447. Subsequently, in 1470 a new much bigger building was erected. Moreover, the parish church was given the status of a collegiate church. At the time the shrine in Poznan was one of the greatest churches in Europe. It was an impressive edifice; the length of the church was almost the same as the length of the square it had been built upon. It was a bricked three-nave basilica in late Gothic style. It was 70 metres long and 42 metres high; the nave itself was 30 metres high. The interiors were richly decorated. There were many chapels and their number was increasing proportionally to the progress of building works. Understandably new pieces of artwork were constantly being added – at the beginning of the 17th century there were 52 altars in the church.

In 1657 the Swedish army set the building on fire. It was then rebuilt and consecrated in 1661. Unfortunately it never regained its former glory; conversely, the building gradually became dilapidated. The fire of 1780 was the final straw. The Prussian government objected to reconstruction works and thus in 1782 Bishop Okecki donated the shrine of Saint Stanislaus the Bishop, which had been abandoned by the Jesuit order after its liquidation in 1773, to the parish. The ruins and the outer curtain of the former collegiate church were dismantled and the foundations were ripped out in 1799. The square was turned into a market place. 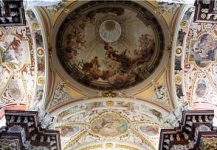 Today’s parish church is considered to be one of the finest examples of Baroque architecture in Poland. It was constructed between 1651 and 1701. Thomas Poncino de Goricia from Lugano was initially responsible for all the building works; he was then replaced by Bartlomiej Wasowski. The entire project was subsequently completed by Jan Cantenazzi. Both the external and internal building work was done simultaneously. Karol Dankwart was responsible for decorating the main parts of the vaults, whereas, the stucco work was done by Alberto Bianco.

The magnificent church was built on Latin cross plan. The nave flanked by two rows of columns with capitals makes the edifice look more impressive. The vaults are richly painted and carved. Two chambers located on the galleries above the aisles may boast similar décor. The main altar was designed by Pompeo Ferrari. There are ten other altars located in the aisles as well as two further altars under the organ gallery.

The painting ‘Wskrzeszenie Piotrowina’ by Szymon Czechowicz dating from 1756, which may be seen on the main altar, is among the most precious pieces of artwork one may see in the church. Other significant masterpieces include the paintings depicting Saint Mary with Infant Jesus (from 15th century) and Saint Barbara dating from 1748. There are also several other pieces of artwork which came from the former Fara church they include a wooden Gothic statue of the Dolorous Passion of Jesus Christ (circa 1450), a wooden Pietà, late Gothic monstrance (16th century), Baroque monstrance (from 1732), Gothic embroidered chasuble (15th-16th century) which is considered to be one of few surviving examples of Polish Medieval embroidery pieces. The organ made by Friedrich Ladegast from Weissenfels, dating from 1876, and in perfect working order.