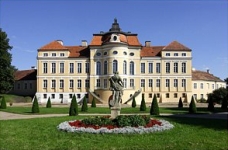 Rogalin and Rogalinek can boast around 700 years of history. Nowadays, Rogalin is primarily associated with the magnificent palace of the Raczynski family and a rare old oak trees park.The history of the palace itself reaches the second half of the 18th century, which is when KazimierzRaczynski, the subsequent Marshal of the Crown to Stanislaw August Poniatowski, became the owner of the estate. Between 1768 and 1774 a palace in late baroque style was erected. It had been designed by an unknown architect most likely associated with Warsaw and Saxon circles.
In the 1780’s the interiors were modernised to suit the classical style. DomenicoMerliniand Johann Christian Kammsetzer, both regarded to be the most prominent architects of that era, were responsible for the all the project work.
The palace with its administrative offices, which are situated parallel to the main building, as well as its semicircular galleries, has the shape of a crescent. A fairly regular façade has been divided by pilasters and two rows of tall windows. On the top of the beautiful mansard roof there is a statue of a Roman shield-bearer with the initials KR (derived from the name of the palace’s first owner – Kazimierz Raczynski) on the shield itself. Nowadays the interiors are quite bare as everything was stolen during and right after the Second World War. Luckily, the interiors were left intact due to fact that the Germans used the building as Hitlerjugend school. However, all the equipment and furniture has been stolen or destroyed. 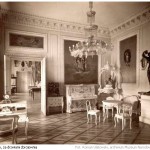 Kazimierz Raczynski was a typical 18th century aristocrat. His loyalties were with the ancient-regime and not with Poland or any other nation for that matter. That is why he did not object getting the money from the Russian government as this allowed him to finance, at least partially, building works on his palace. Its location and grandeur were to reflect the owner’s social rank and political ambitions. The palace, built in baroque and classical styles, was subsequently rebuilt in the first half of the 19th century by count Edward Raczynski (Kazimierz Raczynski’s son). The ground floor contained living quarters whereas the first floor was meant for representative purposes. At the heart of the palace there was a ballroom which was rebuilt into an armoury between 1810 and 1845. Baroque interiors were then replaced with Neo-Gothic decorations with a strong romantic feel. Stained glass windows appeared, the walls were decorated with swords, armours and saddles. There were numerous pieces of antique furniture and rugs. During the partitions of Poland the armoury became a shrine of Polish military history (it was visited by many guests and treated as a museum glorifying Polish past). 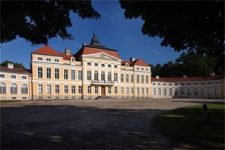 In 1820 count Edward Raczynski had a chapel and mausoleum of Raczynski family built on the east edge of the park. It was designed to resemble the Roman temple of Nemesis dating from I BC. The chapel, erected on an artificial hill, was built in classical style with a portico supported by six columns. The building is tall which makes it visible amongst the surroundings. It might be interesting to know that all the iron elements such as bases and capitals of the columns as well as the lion statues placed by the stairswere made by count Edward Raczynski himself in Rogalin.
In the 1890’s when the palace was inherited by Edward Alexander Raczynski and his wife Roza, nee Potocka, the building was restored and rejuvenated by a Cracow architect ZygmuntHendel. It was he who designed a neo-baroque library on the first floor of the palace. From an early stage members of the Raczynski family knew the historic value of their estate. Therefore, they took great care when renovating the palace; they did not change drastically the décor of the interior, nor the furnishings (the original elements are on display at the National Museum in Poznan).
Between 1911 and 1912 Edward Alexander Raczynski had a building, housing an art gallery, erected below the south administrative office. The owner’s art collection was meant to be exposed over there. At the time it was one of rare edifices in Poland designed solely for public use. The gallery may boast a large collection of paintings by numerous Polish artists such as Matejko, Wyspianski, Malczewski, Falat, Boznanska, Wyczolkowski and Waiss. There are quite a few pieces of renowned European painters from the 19th and 20th century (Symbolists mostly). Altogether there are approximately 250 paintings in the gallery.
All the furnishings and valuables were stolen during the Second World War, when the palace was turned into school for Hitlerjugend (Gebietsfűhrerschule).The process of misappropriation was then continued after the end of the war as well. Luckily most of the art work survived as it had been deposited at the National Museum in Warsaw by Roger Raczynskiright before the outbreak of WWII. Numerous family portraits as well as scarce arts and crafts pieces have survived. In 1949 the palace became a part of the Museum of Wielkopolska, which was renamed to the National Museum in Poznan in 1950.