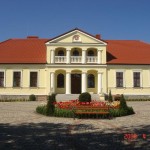 Budziejewo is a charming village situated 55 kilometres from Poznan, not too far from the rout joining Gniezno with Wagrowiec in the municipality of Miescisko.
The first reference to Budziejewo dates from 1364; this is when the Poraj family held the ownership of the estate. Afterwards the property was frequently changing its tenants. Amongst its famous owners there were such influential families as: Nalecz, Opal, Zagorski and Czekanowski.

The manor house is located on the outskirts of the village which has a population of approximately 100 inhabitants. The mansion itself was built in 1856 in late classical style for the Swiniarski family who lived here until the outbreak of the Second World War. At the turn of the 19th century a wing was added to the north side of the manor house. It was designed not to obscure the view of the gable wall with a triad of arched windows.
Anna Daszkiewicz nee Swiniarska was the last successor of the estate. She was the owner of the property between 1932 and 1939. Her husband, Rajmund Daszkiewicz (born in 1898), a participant of the Polish – Soviet War (1920), was murdered by the Nazis at the Mauthausen concentration camp in 1941. 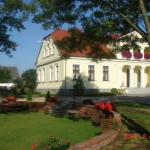 On the 20th of November 1945, in accordance with the ruling of the Land Office in Poznan, the entire estate became the property of the Polish State Treasury. The manor house was subsequently turned into a building intended for public use and a number of council flats.
From 1982 to 1995 the building was solely used by a preschool which was called ‘Wildflowers’. The preschool was divided into various groups which bore names of daises, cornflowers and poppies. That is also why the rooms are named in the same way.

The manor house underwent restoration works in 2009 and remains in private ownership. The estate has subsequently been named ‘Roza Poraja’. The owners offer various facilities including professional organisation of reception parties, training sessions and conferences alike. There are four air-conditioned halls each with a different function. There is a ballroom which can accommodate up to 130 people, a dining hall, conference hall and a reception hall with a fireplace, not to mention accommodation for 36 people.
The manor house is surrounded by a picturesque park with many old trees, colourful wildflowers, ornamental shrubs, a cascade, a stream, a pond, numerous bridges, a terrace adjoining the ballroom and a playground for the youngest ones.

Nearby, just two kilometres from Budziejewo, in a neighbouring village Budziejewko we may find one of the largest boulders in the region of Wielkopolska called Saint Adalbert’s boulder. It was enlisted in the land and mortgage register from 1840 as the oldest and legally protected monument. The legend has it that Saint Adalbert himself was preaching his sermons form the top of that boulder. It is the second largest boulder, the first one being Saint Jadwiga’s of Poland boulder near Goluchow.
On a nearby hill, there is a charming little church built in 1858. It is a unique place which is just right for both quiet and intimate celebrations.