The Fara Church in Konin 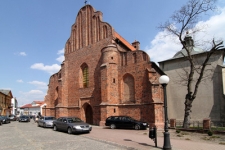 An independent parish of Saint Bartholomew was established at the beginning of the 15th century (St Bartholomew’s had been functioning since 12th century; however, at that time it was regarded to be a filial church belonging to the parish of Saint Peter and Saint Paul in Stare Miasto). Until 1818 the parish appertained to the archdiocese of Gniezno and until 1969 it remained Konin’s only parish situated on the left bank of the Warta River. Conventionally it is a dean parish. The original church was erected in 1100. It is commonly believed that it was founded, amongst 77 other churches, by Piotr Dunin – a knight living the reign of Boleslaw the Valiant. The shrine was then burnt during the Teutonic invasion of 1331. The church in its present form was built in the 14th and 15th century when it was renamed Saint Bartholomew’s. The sacristy is nowadays considered to be the oldest part of the building. Initially it was known as the Chapel of the Holy Trinity and was presumably erected at the beginning of the 13th century. Despite numerous adjustments and reconstruction works the building has retained its original gothic style. Noticeably enough the church was not destroyed during the Second World War.

Saint Bartholomew’s is a brick church (the oldest parts built of sandstone) supported by buttresses. The chancel is three-sided and is lower than the nave itself. The aisles are covered with a lean-to-roof, whereas the nave, chancel and the Gothic Chapel are covered with pitched roofs. Above the nave, on the east side, there is a small church tower.
The sacristy (former Holy Trinity Chapel) and the vestibule, reconstructed in between 1866-1872, are located on the north side of the church. On the south side of the chancel there is the Gothic Chapel of Transfiguration and the Renaissance Chapel dedicated to Saint Mary of the Immaculate Conception, founded in 1607 by Jan Zemeliusz (doctor and philosopher living in Konin). Saint Mary’s Chapel was built on an almost square plan. It is covered with an octagonal dome with a lantern. On the exterior wall one may see a foundation plaque from 1595 as well as a brief epitaph dedicated to two missionaries from the end of the 18th century with the town’s crest. The front façade of the church has a wavy-edged baroque gable and ornamental niches as well as a lancet-arched portal. There are two bronze lion head knockers dating from the 15th century attached to the church’s door. On the right side of the shrine there is a semicircular turret with loopholes. In the vestibule there is a gothic stone stoup in the shape of a chalice.

The chancel is enclosed on three sides; the light enters through lancet-arched windows. The renaissance pews dating from 1604 are richly inlaid, carved and decorated with animal and plant motives. The aisles open up onto the nave with columned arcades of lancet-arches.
The church has many different kinds of gothic vaults. In the nave and the chancel there are stellar vaults, followed by the net vault in the aisles, rib vault in the Chapel of Transfiguration and a dome in Saint Mary’s Chapel. The interiors were painted between 1904 and 1910 by Eligiusz Niewiadomski and constitute a fine example of polychromy. The interiors were subsequently restored between 1964 and 1967. The main neo-gothic altar dates from 1911. Baroque altars located in the aisles and the Chapel of Transfiguration date from the second half of the 18th century. The altar in Saint Mary’s chapel is in Rococo style. Late baroque organs date from 1700. The pulpit itself dates from 1885. 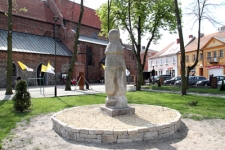 Since 1818 an old Romanesque pillar has been standing in the churchyard cemetery (it has been completely restored). The pillar itself was erected in the second half of the 12th century by Piotr Dunin. It was meant to be a halfway mark between the towns of Kalisz and Kruszwica. It is worth mentioning that there are a number of other interesting crosses and statues worth seeing in the vicinity.