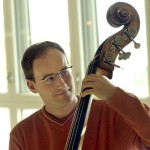 Born in 1973, the Cracow Academy of Music, European Mozart Academy, and the Cologne Hochschule für Musik graduate. Already at university, he had become the leader of double bass group in Orchester der Beethovenhalle in Bonn. He played this role for three and a half years, not resigning from flourishing soloist career, crowned by the 1st Prize at the prestigious CIEM contest in Geneva in 1998.

From then on, his career blossomed. The following year he became a leader of double bass group in NDR-SO (Radio and Television Orchestra) in Hamburg. In 2001 he became a member of a legendary Berliner Philharmoniker Orchestra, and continues to play with this orchestra until present day.

As a soloist, he has performed in many renowned concert halls in Poland, Switzerland, Finland, Germany and Italy. He is also extremely active as a chamber musician and is invited to workshops and music courses where he teaches double bass.