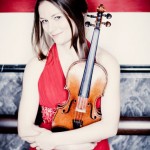 Lena Neudauer, born in 1984 in Munich, Germany, began playing the violin at the age of three and at the age of ten she performed her first concert with an orchestra. As a young student, she entered the Mozarteum University in Salzburg in a class led by Helmut Zehetmair at age eleven, she continued under the instruction of Thomas Zehetmair and later on with Christoph Poppen.

From an early age Lena Neudauer sparked sensation at the Leopold Mozart International Competition in Augsburg, where she not only won 1st prize, but was also
awarded the 1st Prize, Mozart Prize, Richard Strauss Prize for the best interpretation of Richard Strauss’ Violin Concerto and the Audience Prize.

In 2010, Lena Neudauer was appointed professor for violin at the University of Music in Saarbrücken (Hochschule für Musik Saar), becoming one of Germany’s youngest university professors.

Her debut CD, released in 2010 on Hänssler Classic presenting the complete works for violin and orchestra by Robert Schumann together with the German Radio Philharmonic Orchestra Saarbrücken Kaiserslautern under Pablo Gonzalez, was granted the International Classical Music Award (ICMA) for the best concerto recording of the year.